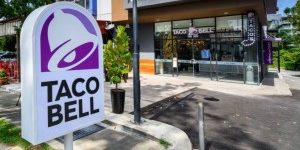 Taco Bell recently opened its doors in Malaysia and brought on board Gitanjali Sriram as head of marketing and communications. She will oversee all advertising and communications with the collaboration of the Taco Bell International APAC marketing team. Sriram was previously with Publicis Groupe, last working as chief operating officer for Malaysia in 2020. She also worked at the Groupe’s Manila and Dubai offices.

At the same time, it also appointed Lion & Lion and Edelman Malaysia to support the launch of its first outlet, as well as manage digital and social media and PR duties respectively for the brand. The six-month appointment for Lion & Lion followed a pitch in February with a final presentation on the 25th of the same month and has the possibility of an extension. Meanwhile, Edelman oversees media relations, earned influencers and local community outreach and engagement. The PR pitch was held approximately two months before the official launch.

Taco Bell’s new restaurant in Cyberjaya captures the brand’s “Live Mas” philosophy, which translates to “Live More”, as in more fervently and authentically. Recognising Malaysians’ passionate love of food, the brand introduced the spirit of “Live Kaw Kaw” – a colloquial expression that encourages Malaysians to make every day extraordinary through a unique dining experience. The Malaysia franchise is owned by Disruptive Concepts, an entrepreneur-led group with varied interests in the food and hospitality industry. The group also owns the Taco Bell franchise in Singapore.

Carlsen explained that its work with Secret Recipe helped showcase its strong understanding of the local Malaysian mindset and food culture. “We are able to localise the global idea while keeping the brand’s DNA and speak to the Malaysian food culture,” he added.

According to Carlsen, Lion & Lion is very conscious of the importance of brands being able to transcend boundaries of culture, ethnicity, and native nuances, while still being able to speak in a way that relates to its audience. “Taco Bell is a brand with a very established presence and origins that is familiar and recognisable by people around the world. When we are able to effect that essential emotive connection with its audience in whatever part of the world and still embody all that the brand is known for today, you will know that we have created magic,” he added.

When asked about its vision for the account, Carlsen explained that Lion & Lion aims to help Taco Bell create consistent brand experiences and build a connection with Malaysians, that expresses its “Live Mas” philosophy. “We capture this in the unique Malaysian expression – #LiveKawKaw. This essentially will be the premise of how we will navigate a digital-first world, through integrated creative solutions,” he added.

Meanwhile, Harris Beh, franchise operator of Taco Bell Malaysia and Singapore, said the integrated campaign presented by Lion & Lion “was very much on-strategy and on-brand”. “It did a great job taking the comprehensive and meticulous information shared by the Taco Bell international brand onboarding team. Lion & Lion came back with a campaign that we knew would immediately resonate with our customers, leveraging the international ‘Live Más’ brand positioning and equity,” Beh said.

The agency also successfully translated that sentiment locally into the memorable “Live Kaw Kaw” campaign. Beh added that the campaign created “an immediate connection” between Taco Bell and Malaysia, calling on all Malaysians to join Taco Bell fans worldwide in pursuing their passion and living their best life.

“As a digital advertising agency, Lion & Lion also recommended a robust and creative media plan to reach all youthful Malaysians, our core consumer, and move them to action and engagement. We are pleased to be partnering with their enthusiastic and passionate team to introduce our scrumptious craveable cuisine to Malaysia,” Beh added.

Seperately, Edelman Malaysia’s head of integrated brand Jess Chong told A+M that while the agency works with the brand in multiple markets including the US, Australia and India, what worked for the team in Malaysia was the earned approach that captured the client’s imagination to go with Edelman’s recommendations.

“Aside from the traditional PR duties, we identified opportunities for Taco Bell to connect and engage with content creators, food lovers to dial up the local story we want to tell, #LiveKawKaw, which we have seen great outcome to-date from the media coverage, social media stories,” she said.

Commenting on Edelman, Beh said it is very pleased to partner with the experienced PR team at Edelman to amplify the brand messaging to media and to key influencers. The agency’s approach of maximising earned content to deliver brand messaging to Malaysian consumers was very much in line with the Taco Bell brand that values transparency and authenticity, he explained.

“It has also been excellent collaborators, reaching out to its international counterparts that work on the Taco Bell brand, fast-tracking its learning curve so the agency could hit the ground running,” he explained.

Beh added that Edelman is also well-versed in the sensitivities of managing the narrative in a digital environment. According to him, the agency successfully executed a virtual brand launch to engage media in these challenging times. “Its stellar work on the brand so far, confirms that we made the right choice,” he said.

Taco Bell was founded in 1962 and has since expanded into 30 countries. One of the key features in its first Malaysian restaurant is the centrepiece mural art that is an interpretation of how the spirit of Malaysian culture and the Taco Bell brand are perfectly blended. The mural was designed in collaboration with local Malaysian artist Wilson Ng. According to Taco Bell, the initiative is part of the brand’s commitment to supporting the local creative community. At the same time, the features in the restaurant combine to create a colourful, fun, and Instagram-worthy space.

Other restaurant features include an open-kitchen theatre where fans can watch their meals being prepared, free high-speed WiFi access throughout the restaurant, multiple stations to charge customer’s mobiles and laptops, buzzers to inform customers when their food is ready for pick up, and so much more. 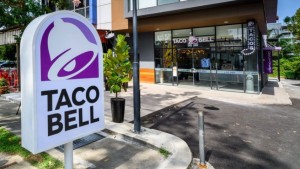