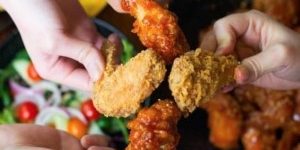 If you are a fan of Korean fried chicken, this news will have you shouting “cluck yeah!”

NeNe Chicken, which is considered “one of the best Fried Chicken franchised companies from South Korea” is poised to open its second Vancouver location.

Launched in May 1999 in South Korean, NeNe has since grown to over 900 restaurants globally to include outposts in Australia, the United Arab Emirates, Hong Kong, Malaysia, and Singapore. Now the franchise is slinging fried chicken in Canada; this spring, NeNe opened up its first Vancouver outpost at 1070 Kingsway.

The word “ne ne” translates as “yes yes,” and the chicken franchise is hoping that’s just what you’ll be thinking when they launch at 1231 Davie St. NeNe is occupying the West End space that had previously been home to Ramen Koika. (This was the original location of Ramen Koika; their second location, which debuted in 2018, shuttered in 2020.)

The NeNe Chicken menu centres on fried chicken, available in pieces and in loaded burgers.

Fried chicken can also be ordered up in half-and-half combos if you can’t settle on just one style, or you can get pieces in combos with a drink and sides like fries, onion rings, or slaw.

Burgers at NeNe are done up in all sorts of flavour combos, like “Mexi – Salsa,” “Hawaiian,” or even a fiery “Hot – Bling” version, for those in need of some spice. 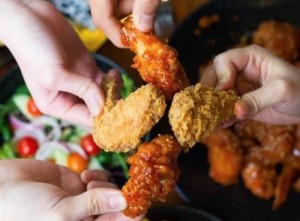