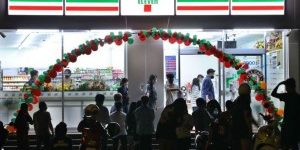 The first outlet of the US-based convenience store chain is located in Prek Leap village, one of the most bustling areas of the district, on National Road 6, an arterial road that carries considerable commercial traffic.

CP All Pcl said in a press release: “This is an important step for CP All in growing into ASEAN, highlighting the strength of service from Thailand to Cambodian consumers [with a] focus on doing business, along with creating value for society according to the aspirations – create and share opportunities.”

Its senior vice-president Chairoj Tiwatmuncharoen noted that CP All (Cambodia) Co Ltd, an indirect subsidiary of CP All Pcl, entered into a master franchise agreement with 7-Eleven Inc last year and is solely authorised to develop and operate stores in Cambodia.

He said: “The opening of the first 7-Eleven store in Cambodia … is an important symbol of friendship, and good relations between the two countries – both at the government and people’s levels – and quality services.

“What is important to emphasise is … respect for the law and the practices of the society that we are part of. At the same time, we have adopted the same approach [that we use in] Thailand.

“In addition to the quality of products and services, we will endeavour to contribute to value-delivery – whether it [concerns] human resource development, promotion of small entrepreneurs,[or] conducting business with environmental considerations – to enhance the Cambodian economy.

“We hope to be well received by the Cambodian people,” Chairoj added.

As corroborated by a 7-Eleven Inc statement, the first 7-Eleven outlet is situated in the ground floor of an office building, at No 41, 43 National Road 6, across the road from Prek Leap National Institute of Agriculture (GPS Coordinates: 11.6418N, 104.9176E).

CP All executives have hinted at plans to open at least six stores this year, including a branch at a PTT petrol station in northern Phnom Penh’s Prek Pnov district that was reportedly scheduled to open in mid-June, according to Cambodian ambassador to Thailand Ouk Sorphorn.

He told The Post that the inaugural branch of 7-Eleven mark a new milestone for CP All’s business expansion into Cambodia.

He also suggested that the Thai conglomerate’s entry into the Cambodian market is in the line with Cambodia’s Economic Diplomacy Strategy, which is implemented by Minister of Foreign Affairs and International Cooperation Prak Sokhonn with support from Prime Minister Hun Sen.

According to plans, products from local small- and medium-sized enterprises (SME) sold in 7-Eleven in Cambodia will comprise at least 50 per cent of stock, he said, stressing that the franchise would create many jobs for locals.

“This is a great opportunity for Cambodian SMEs to partner with CP All, the company [operating] the world’s largest chain of stores” in Cambodia, he said.

The Bangkok-listed 7-Eleven franchise operator, the retail arm of Charoen Pokphand Group Co Ltd, granted CP All Cambodia franchising rights for 30 years in the establishment and operation of 7-Eleven branches, according to Thai local media reports. 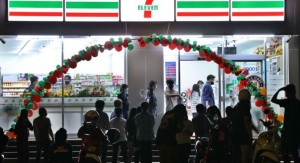