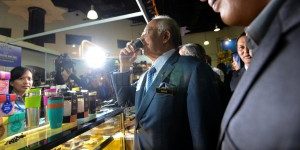 In Malaysia, Hasan said 773 franchises had been registered under the ministry to date.

”The food and beverage sector leads with 36%, followed by services and the maintenance sector with 12% of the total registered franchises.

”Hence, the government would like to encourage franchise entrepreneurs to venture into new sectors, particularly in ICT, tourism and green technology,” he said in his speech at the Franchise International Malaysia 2015 (FIM 2015) at Putra World Trade Centre (PWTC) today.

Hasan said for the past years, the government had been promoting franchising as the preferred business solution among business owners and a preferred career choice as an entrepreneur domestically and internationally.

He said exhibitions such as FIM and other franchise road show programmes would continue, and that the homegrown franchisors were encouraged to grab this opportunity to promote their businesses.

”The theme ‘Leap Beyond the Limits’ is a true reflection of the direction that should be adopted by homegrown franchises at this juncture.

”I believe by the year 2020, the franchising industry will be recognised as one of the catalysts to national economic growth similar to developed countries such as Australia, France and the US,” he said.

Hasan added the ministry was working closely with other government agencies such as the Malaysia External Trade Development Corporation (Matrade) to formulate effective strategies in expanding the market for homegrown franchises.

He said the government also provided continuous support in the form of various grants and facilities to enable businesses to grow through franchising. – Bernama, June 13, 2015.