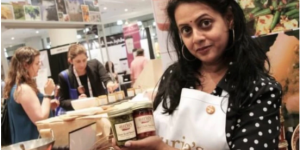 A young Malaysia-born woman who is a chef and producer of artisanal food products has succeeded in breaking into the US mainstream Foodtown supermarket franchise which launched her products this weekend.

Foodtown supermarket outlets in New York, New Jersey and Pennsylvania will for the first time sell these products. Other mainstream specialty stores such as Dean & Deluca, Greene Grape and Kalustyan will also sell her products.

While Malaysian foods, condiments and sauces are visible on the shelves of some local ethnic markets, mainly Chinese-owned, Malaysian products in the mainstream US supermarkets have been a rarity so far – until Sunday when this young woman broke the tradition.

Auria Abraham, who was born and raised in Seremban and arrived in the US in the early 1990s, grew up in the midst of flavours and foods of her hometown, drawing inspiration from Malaysia’s diverse culinary and multi-ethnic makeup of Malaysia.

Before the Foodtown induction of her products, which are marketed under the brand “Auria’s Malaysian Kitchen” – also the name of her company – she had already won the 2018 ‘sofi’ bronze and silver prizes at the prestigious New York Fancy Food Show (NYFFS) 2018 held from June 30 to July 2.

Her company, which is based in Brooklyn, New York, presented two entries for the ‘sofi’ competition – the lime leaf sambal won the bronze prize in the cooking sauce (marinade) category while the pandan kaya (coconut jam) garnered the silver prize in the jam preserves category.

The products, two out of 150 winners, were judged by a national panel of specialty food experts; the products were judged on taste, including flavour, appearance, texture and aroma, ingredient quality and innovation. 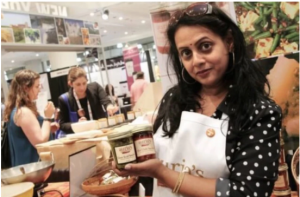