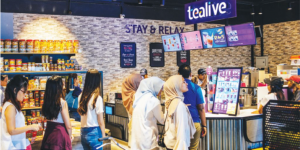 “We plan to open 130 to 150 outlets a year, mainly in Johor, East Coast and Sabah and Sarawak, and we’ll have 1,000 stores within three years,” its founder and CEO Bryan Loo said in a statement.

Loo expressed gratitude to Malaysian consumers for having supported the brand to reach 600 outlets in slightly over four years, despite the spread of the Covid-19 pandemic.

“When the pandemic hit, we transformed ourselves quickly to launch our own bubble tea e-commerce platform and we’re the first to market the DIY (do-it-yourself) bubble tea kit.

“We later won Gold for the Asia e-Commerce Awards and silver for the Marketing Excellence Awards, but it was actually a bonus. We did it for our Tealive consumers who were stuck at home during the first lockdown, having had time on their hands and missing their favourite drink,” he said.

The group planned to continue focusing on digitising the business and prioritising customer convenience, including various cashless and contactless ordering channels — scan to order, order ahead and drive-in model across the store network.

Tealive now has 10 drive-through outlets and over 100 drive-in shops where customers can order ahead and park at dedicated bays for the drinks to be served to them in their cars.

Loo said convenience also means accessing the consumers wherever they are, from neighbourhood shops and community malls to transit terminals and petrol stations, as well as through delivery partners Foodpanda and GrabFood to their homes.

“We have recently collaborated with Affin Bank Bhd for the first bubble tea shop in a bank branch and we look forward to more such breakthrough models,” he said.

“Loob Holding has also been working with Petronas Dagangan Bhd to set up Tealive stores inside Petronas’ Kedai Mesra since 2019,” he added.

At the store level, convenience also extends to the current Tealive 3.0 format featuring a dedicated bakery corner, Tealive Eats and self-order standees at the entrance where customers could order and pay online before going in to pick up their orders.

Central to the digital strategy is Tealive Club, a proprietary app which is a refreshed and refined version of an integrated loyalty programme equipped with various ordering functions from delivery to its own e-commerce.

Loo said innovation is also seen through the Tealive brand’s extension into the fast-moving consumer goods segment as it has shown its capabilities in extending beyond drinks.

“So far, we have collaborated with Wall’s to offer Boba Ice Cream, and with Mamee Double Decker to bring the world’s first boba instant noodle.

More recently, it has offered plant-based bubble tea options to keep the brand ahead of the trend and remain relevant in the eyes of the consumer.

“We have just embarked on an exclusive collaboration with Minor Figures, UK’s biggest oat milk brand, to elevate our brand proposition and become not just trendy but closer to global drink trends.

“We’re not only infusing oat milk into our drinks, but also offering this wholesome alternative milk to customers who’re vegan or lactose intolerant,” he said.

To celebrate this 600th store milestone, Tealive is offering 60 free drinks a day for six days from May 20 at the Taman Nusantara store in Gelang Patah.

Nationwide, Tealive customers get to win Oxwhite x Tealive limited edition tote bags and cash vouchers when they buy drinks from May 20 to May 25.

Other offers include all regular drinks at only RM6 per cup after 5pm across all stores from May 20 to May 25. 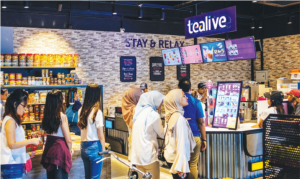