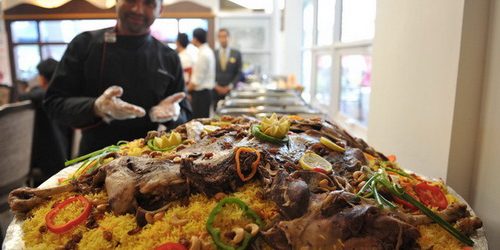 “You need to know what your customers want. It’s not easy to maintain your brand, but customers will pay for new things,” he said at a seminar on Enhanced Franchise Development programme (EFDP) organised by the Malaysian External Development Corporation (MATRADE) recently.

“Always innovate and don’t stick to one. From time to time, improve your product with creative ideas to stay relevant. It’s a tough challenge,” added Abdul Malik, who is also Managing Director of D’Tandoor International Group of Restaurants.

He said the company started as a conventional restaurant in Malaysia, but due to lack of manpower and resources, it decided to venture into franchising. “We started as a family business and have been running it professionally as we grow. The fastest to grow is franchising.”

D’Tandoor had its beginning in 1984 when Penang-born Abdul Malik, started working in a Northern Indian Restaurant, Shezan in Subang Jaya. After working in Shezan, he was given the trust to manage Shikara, which had outlets in Bangsar and Petaling Jaya but had to be closed later due to the economic slowdown.

He later joined Kelab Aman for four years from 1986 to 1990 which was considered the platform for Abdul Malik and his wife Mumtaz Begum Mohd Sidek, to open their own restaurant and face the real challenges.

In 1990, he decided to migrate to Sydney, to look for better opportunities and fresh ideas to be brought back and implemented in Malaysia. While he was there, he did the Diploma Course in Business Management.

In 1993, Abdul Malik returned to Malaysia and opened the first D’Tandoor Restaurant in Damansara Utama with cofounder, Tan Hun Kim. Since then, d’Tandoor has become the pioneer and a household name in Malaysia, with outlets overseas.

“We had gone through hardship in business but today, we are proud to say that D’Tandoor Malaysian Restaurant is the biggest North Indian Restaurant chain in Malaysia,” says D’Tandoor on its website.

It is planning to expand its outlets in every major state in Malaysia and is also looking into China, Dubai and Khazakhstan.

D Tandoor restaurants are well recognised, with 18 branches worldwide and are still growing strong. Australian Times had voted the restaurant as the Best North Indian Restaurant in Perth.

The MFA awarded D’Tandoor as the Most Promising Franchisor in 2005. In the same year, the Malaysia Australia Business Council (MABC) awarded Abdul Malik as the Entrepreneur of the Year for his contribution in boosting Australia-Malaysia ties.

“We had gone through hardship in business but today, we are proud to say that D’Tandoor Malaysian Restaurant is the biggest North Indian Restaurant chain in Malaysia,” says D’Tandoor, which also provides catering services to its customers.

D’Tandoor also serves Arabic food and fast food such as Samurai and Tandoori burgers. The Putrajaya restaurant has at least 20 types of naan bread and its speciality dish is the 24-hour roasted whole leg of lamb called Raan Srikandi, which can serve six to eight people.

On the Australian market, Abdul Malik noted that doing business for new players was tough and costly, advising them to do their homework and learn the shortcut. “Experience is the best teacher. With know-how, experience and contacts, you become smarter,” he noted.

Franchising and Field Services Manager of halal fast food restaurant chain, MarryBrown Sdn Bhd, Kairul Azman said franchisors must first study the need in the markets and their culture before venturing into a new market.

“You need to find out how best your franchise can be marketed in the country.The location and distance will reflect the cost. Factor in language barriers and printing costs for brochures too,” he said.

Others include marketability of products and services. Kairul cited spicy food products, for instance, would not guarantee success in American and British markets.

Franchisors also need to study access of raw materials, human resource requirements and they must be prepared to comply with regulatory bodies such as the Food and Drug Administration (FDA), he said.

He said foreign governments’ policies were reflected in their legislations. “Some adopt a positive attitude toward franchisors, and there are also those which impose restrictions on certain type of business and operation,” he added.

An international strategy should also be developed for those planning to expand their franchise business overseas. Solid market research, intellectual property rights protection, choosing the right partnership and regular monitoring and reviewing of international operations, are key elements.

“A global strategy is needed to develop international brands. It’s not easy. We had difficulties in Africa in 2008. Transferring of information, equipping locals with enough skills and ensuring our team is strong were part of the challenge. It took us almost four years to position them before they could run on their own,” said Kairul.

It currently has 148 outlets in Malaysia and plans to increase to 200 outlets by the second quarter of this year.