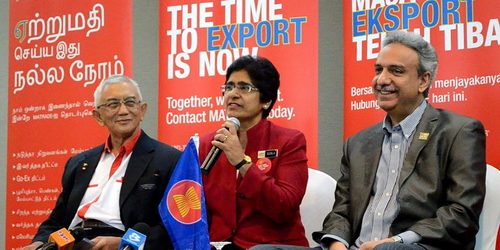 KUALA LUMPUR, April 1 (Bernama) — Franchising is a business model that has led millions globally to financial success, with every franchisee having a singular story. Its encouraging growth in Malaysia is attributed to its popularity as a preferred way of doing business.

The government through the Perbadanan Nasional Berhad (PNS) has taken the leading role in nurturing and developing the local franchise industry, while the Malaysian External Trade Development Corporation (MATRADE) adds to the value chain by serving as a vehicle to promote Malaysia’s franchise business.

Todate, 61 Malaysian franchisors have expanded their brands into more than 55 countries, with a total of 2,400 outlets, Malaysian Franchise Association (MFA) Chairman Datuk Mohd Latip Sarrugi said. In Malaysia, about 1,123 franchises are registered under the MFA, which include local franchisor, master franchisee, franchisee of foreign franchisor and foreign franchisor.

During the 2015 Budget speech, Prime Minister Datuk Seri Najib Tun Razak announced a RM20 million budget allocation for the Enhanced Franchise Development Scheme (EFDP) to be implemented by the Ministry of Domestic Trade, Cooperatives and Consumerism (MDTCC) and the MFA.

EFDP is an enhancement programme for the existing Franchise Development Programme (FDP), which focuses primarily on nurturing and encouraging more franchise exports to foreign countries.

RETRENCHMENT TRAINING…D’Tandoor founder Datuk Abdul Malik Abdullah (right) says his company provides training for those who had been laid off from their respective jobs.Pix: ZackZaini fotoBERNAMA

Mohd Latip said, of the current 2,400 outlets of different brands, about 300 were expected to expand their businesses especially into the ASEAN market.

“There is a RM2 million yearly allocation under the EFDP to help local firms expand their businesses overseas,” he said after the one-day EFDP seminar at Menara MATRADE here recently, adding that the MFA expected to grow local franchise outlets by between 10 and 15 per cent this year to tap overseas markets.

MATRADE Deputy Chief Executive Officer Susila Devi said, the EFDP aimed to increase awareness on oportunities for Malaysian franchises to expand into the international market and improve their knowledge and skills on strategies to penetrate the markets.

“We are proud that there are already a number of successful franchise brands from Malaysia around the world, especially in ASEAN, such as Marrybrown, Papparich, Secret Recipe, D’Tandoor, Chicken Rice Shop, Kumon, Nelson’s Global Art & Creative, Smart Reader, Sports Planet, Tomei, Poney and Q-Dees,” she added.

“We believe other local franchises will have a big potential in exploring the international market in view of the fact that there are now 61 of them in over 55 countries,” she said, adding that they had stamped the country’s name on the global stage.

Susila said Malaysian companies should also leverage on MATRADE’s 46 international offices, especially those in ASEAN, to expand their franchise business. The agency, she added, would continue to support them as franchising had been recognised as one of the vehicles to diversify Malaysia’s exports of products and services.

MATRADE has lined up 150 activities, including one on franchising in its 2016 calendar, she said, adding that of these, 85 were for export promotion.

“If any of these programmes do not fit your activities or markets, don’t be worried. We support any activities that are undertaken overseas as our 46 offices worldwide, including Russia, will serve your needs,” she told the EFDP seminar participants.

“We can adjust our guidelines and criteria to fulfil your needs,” she said, advising companies to develop their business locally before venturing overseas.

Feedback from Malaysian Trade Commissioner in Myanmar Jonathan Rao showed that opportunities abound for Malaysian companies to develop the ASEAN member’s franchise industry, said Susila, noting that at least three Malaysian companies had taken a trip there to study its market potential.

She also listed India as a matured market, with 3,000 over franchise companies operating, yet very few Malaysian companies took the bold step of expanding their business there.

India is encouraging foreign companies to invest in its franchise industry, she said, noting that priority would be given to developing its retail sector, and beyond food and beverage sector, such as healthcare.

Farther away is Chile, a member of the Trans-Pacific Partnership Agreement (TPPA), said Susila.

“The platform for doing business with Chile is already in place given that under the free trade pact between Malaysia and Chile, almost 92 per cent of exports to Chile enjoy zero duty. It’s a matter of looking at your business plan,” she explained.

“Opportunities are there in regional markets such as India, Bangladesh, Pakistan and Latin America. Our trade offices on the ground will provide information and contacts for you to go to the market. We provide the trade channels to internationalise your business,” said Susila, singling out Marrybrown as a mentor for companies starting out in the franchise industry.

Susila said that Malaysia was among the earliest within ASEAN to venture into the franchise sector, with a regulatory system in place, a strong association and a ministry to regulate the industry.

“Once the ecosystem is firmed up, business will flow. Malaysian companies will find it easier to go overseas, while foreign companies can expand their operations here.

It works both ways as the platform creates opportunities for companies to expand in the services sector.

Tourism will also drive the franchise industry’s growth. Tourists who come to Malaysia will look for the products and services when they go back to their country,” said Susila.

On the impact of the economic downturn on the franchise industry, Mohd Latip said: “I think it’s a test for the franchisor and franchisee to sustain their business during the difficult times.”

“We have been advising members to be more stringent, to cut off the frills of the industry so that we can pass through the journey of these difficult times. The public understand. This is the time the franchisor and franchisee must work together to sustain the industry particularly their own brand,” he added.

D’Tandoor founder and Chief Everything Officer (CEO) Datuk Abdul Malik Abdullah said: “There’s no denying the economic slowdown also affected the franchise industry. No one is spared in a situation when the economy goes down.”

“During such times, people are not spending more because they are worried things are getting bad. Hence they start to save. If people don’t spend, the government doesn’t spend. There will be a chain reaction. When business is affected, employees suffer. As a result, unemployment goes up. When people are out of jobs, the crime rate goes up. It’s not good for anybody.”

“However, as franchisors, we are taking the extra mile to help franchisees. This year, our third menu at all our outlets are free of charge. The cost of printing is borne by us. Instead of saving money on advertising, we are increasing our ad budget,” he added.

He said “negative self-prophesy is a dangerous attitude as it can create a chain reaction to bring down the industry. As for D’Tandoor, our business picked up last year. What’s important is we must innovate and diversify our products. We have introduced western and Arabic food in our menu.”

On the lucrative markets, Susila said that Malaysian companies should look at ASEAN given its close geographical proximity, with alot of barriers removed.

“Each country will have different requirements, but there are opportunities for each sector. We can provide market assessment for companies interested to venture abroad,” said Susila.

Abdul Malik who is also ASEAN Retail Chain and Franchise Federation honorary advisor said, his company provided training for those who had been laid off from their respective jobs. He cited employment opportunities for Malaysia Airlines (MAS) employees who had been retrenched under the national carrier’s restructuring programme.

Franchise consultants must also keep abreast with the government’s blueprint on franchising and the laws and regulations of nations they are operating in, he said, noting that one state’s legal provision is different from the other, he said.

Abdul Malik said for those wishing to venture into ASEAN, his company could complement MATRADE’s role in facilitating their franchise business to the region, especially matters related to trademark registration and verifying bonafide partners.

“Going through the association and the ministry’s umbrella as well as participating in exhibitions organised by MATRADE and the MDTCC is one of the fastest ways to grow your brand internationally,” he said. It was through MATRADE and MDTCC’s expos that D’Tandoor managed to open a restaurant in Saudi Arabia.

THE TIME TO EXPORT IS NOW

MFA’s Mohd Latip said most of the franchisors were Small and Medium Enterprises (SMEs). Some, such as Marrybrown and Secret Recipe had been upgraded from their SME status, noting that the franchise industry generated an annual turnover of RM26 billion locally.

Susila said “The franchisor does not have to be a big company. It’s your brand that is carrying you across. The other person who is taking your licence to manage your franchise, can be that big company.”

It is open to anyone with a business acumen, ready to go through formal training, impart knowledge as mentors are all around. Let’s pass this message about franchising. It’s just not for the big people, but anybody can move into the franchise sector. It is a good area for us to expand further.”

She said MATRADE had also set up an Integrated Centre for Export (ICE) for Malaysian companies to obtain information from various government agencies. It is located at Level 2 of Menara MATRADE and is open twice a week every Wednesday and Thursday.

“This is another initiative from the government to facilitate especially the SMEs to go into the export market. We keep on providing facilities they ask for, but at the end of day, the private sector will have to drive the business, especially into ASEAN nations, which have similar culture.

The time to export is now. The market will remember brands that stay during good and bad times. The best time to invest in promotion and branding is during bad times and not good times,” said Susila.