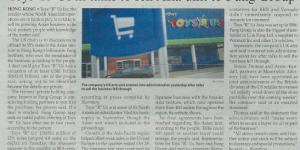 Toys “R” Us Inc., the retailer whose North American operations are in bankruptcy, is in talks to sell its growing Asian business to its local partner, people with knowledge of the matter said.

The U.S. chain is in discussions to offload its 85 percent stake in the Asian venture to Hong Kong’s billionaire Fung brothers, who own the remainder of the business, according to the people. A deal could give Toys “R” Us Asia a valuation of at least $1 billion, one of the people said, asking not to be identified because the details are private.

The tycoons’ private holding company, known as Fung Group, is considering finding partners to join it in the purchase, the person said. If a deal is reached, Fung Group may seek an initial public offering of Toys “R” Us Asia after one to two years, according to the person. Toys “R” Us’s $583 million of 12 percent notes jumped 4.8 cents on the dollar on Tuesday, the sharpest increase in five months, to 88.5 cents, according to prices compiled by Bloomberg. 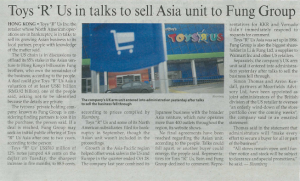