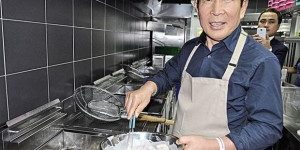 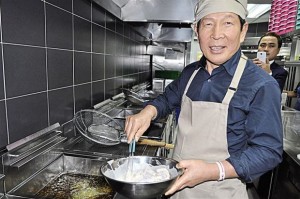 Gently does it: Kwon demonstrates the proper way to fry chicken the KyoChon way.

WHEN KyoChon, the South Korean fried chicken franchise opened in the 1Utama mall in Petaling Jaya, pandemonium reigned on its first day.

The lure of fried chicken alone could never have attracted such a frenzied sea of people to the 232sq m store.

It was the presence of Super Junior, a K-pop group flown in to grace the opening that had added the extra bang.

The stunt did not come without its fair share of woes for Double Fry, the master franchise holder. In the melee, the feet of founder and chairman of Kyochon, Kwon Won Kong, was trampled on. He was also hit in the face.

However, the gentle 63-year-old gamely bounced back for Round 2, but with a more subdued media squad the next day. Stuff like this is peanuts for Kwon who started life as a pushcart vendor selling books in Daegu, South Korea, before becoming a labourer laying oil pipelines in Dumai, Sumatra.

“I always had the entrepreneurial spirit,” says Kwon through an interpreter.

His big break came when he returned to South Korea to become a taxi driver.

“In South Korea, taxi drivers were entitled to apply for private licences. When I received mine, I decided to sell it. I earned US$30,000 (RM99,500) from it and used the money as my capital to start my first store in Gumi, about 36km from Daegu,” he reveals.

It took Kwon two years to get his recipe right. Sales figures of his batter-coated, sauce-glazed fried broilers during the early days amounted to slightly over a kilo of chicken, about 24 pieces.

Kwon may not have realised it then but his product was poised on the brink of the Korean Wave.

Riding on the tide of South Korean dramas, pop groups and Samsung, reports on the emergence of South Korean fried chicken joints in Queens, New York had already appeared in the New York Times as early as 2007.

Just shortly after he got his chicken recipe right, Kwon was approached by several businessmen who asked if he was interested to share his recipe with them to start a new outlet.

“In South Korea, it is the norm among people in the food business to do this — starting a new shop using a proven recipe. From the outset, my way of commerce is not just about profit. I have always believed in a win-win situation.

“To me, the success of the other person must come first as his failure will be a reflection of my incompetence. So, I made sure every outlet who shared my recipe did well,” recalls Kwon.

This philosophy naturally endeared him to many and by 1995, Kwon had set up his franchise.

From the business aspect, Kwon quickly asserts he is not the type to sell ice to an Eskimo.

On the second day of business at 1Utama, he frankly told the staff their journey is just the beginning.

“I may not be here all the time, but just imagine I am right beside you, cheering you on,” Kwon was heard saying to the floor staff.

Good business, he adds, is not about sugar-coating.

“It is about both people sharing the same heart and mind and you can tell this at first contact,” says Kwon.

Crucial to the sustaining power of his 23-year-old business is to never compromise when it comes to doing the right thing — even if it means a loss in revenue.

“When one only thinks of profit, one might take the wrong action,” warns Kwon.

Case in point was during the height of the avian influenza in 2004. Kwon stopped the expansion of 300 outlets, costing his company a loss of US$6mil in prospective revenue.

“In the face of such a terrible disease, it would be totally against my principle to expand,” says Kwon.

It was in this spirit, Kwon found his Malaysian master franchise holder in Datuk Steven Chin, the chairman of Double Fry and managing director of Gammerlite, a road design, construction and management entity in Kota Kinabalu, Sabah.

The link to KyoChon was made through Hwang Hong Seng, a portable asphalt recycler manufacturer in Korea, a friend of Kwon’s.

“I expressed to Hwang my desire to diversify my business and he introduced me to Kwon,” reveals Chin, who is in his mid-50s.

A Hakka who started life as an assistant in his father’s electrical shop in Sandakan at the age of 12, Chin signed an MOU with Kwon within 30 days of their meeting.

“I have always liked the challenge of starting something new,” explains Chin.

Formerly the head of audit for Nestle Malaysia and Singapore and later the vice-president of the beverages business unit of Nestle Philippines, the 36-year-old says the outlet in 1Utama will be the first halal KyoChon restaurant in the world.

Goh will ensure the local outlet complies to the strict set of criteria dictated by headquarters.

“There are 30 items set out on this list,” reveals Goh.

Among the “musts” are that the chicken must be antibiotic- and hormone-free. They must be delivered and stored in chillers, as freezing will compromise the taste. Lastly, only canola oil is used for frying.

For a calorie comparison, the count for the regular variety of fried chicken is at 61 kcal while the six flavours from the KyoChon menu hovers between 43 and 45 kcal.

“The support from KyoChon has been amazing,” says Goh.

For the opening, Kwon had sent a team of eight to supervise operations.

“Now, I only send eight. If Terry needs further help, I would not hesitate to send in another 80!

“I have already promised him, his success will come first,” says Kwon with a smile.

Now, that is one good reason to say, Kamsahamida (Thank you in Korean).