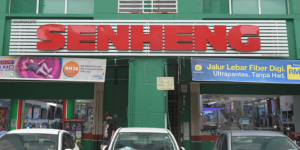 Electrical & electronics (E&E) retailer Senheng New Retail Bhd reported a net profit of RM31.21 million for its fourth quarter ended Dec 31, 2021 (4QFY21), up 13.3% from RM27.55 million in the corresponding quarter a year earlier, on the back of higher revenue, with gross margin remaining stable at 21.3%.

The electronics retailer also declared its maiden interim dividend of 1.3 sen per share for FY21, amounting to RM19.58 million, to be paid on April 29, with April 11 being the ex-date of the payout. This is the second set of publicly released quarterly earnings for the group, which was listed in January this year.

Compared to its immediate preceding quarter (3QFY21), Senheng’s net profit jumped 191.86% from RM10.69 million, while revenue rose 45.5% higher from RM313.81 million, in line with seasonal increases in sales during its marketing campaign periods, including Members’ Day sale, 11.11 sale and 12.12 sale held in the months of November and December.

Senheng said it is optimistic about its prospects and that it is well-positioned to reap the benefits of the economic recovery through its ongoing store enhancements, expansion exercise, as well as the launch of its new Senheng app in Nov 2021.

“Our tech-enabled omnichannel strategy has continued to drive our growth, as we provide seamless shopping experiences via integration of technology platforms and retail stores to attract and retain more customers. Notably, we achieved our best-ever results in FY2021, attaining double-digit growth rates even amidst the tough operating environment. We are also seeing the results of our strategy in building “territory champion” stores that have proven to boost store sales for us,” said Senheng executive chairman Lim Kim Heng in a statement.

“Going forward, we will continue with our expansion plans to launch even more large and enhanced stores in major cities across Malaysia in 2022,” he added.

The group has allocated RM49 million as capital expenses to launch 21 new or upgraded stores this year, which are expected to contribute positively to its FY22. It said its bigger and enhanced ‘Grand Senheng’ and ‘Grand Senheng Elite’ stores on average record 30% to 50% higher sales compared to its typical ‘Senheng’ stores.

At market close on Monday, Senheng’s shares settled half a sen or 0.58% lower at 86 sen, valuing the electronics retailer at RM1.28 billion. The stock, listed on the Main Market of Bursa Malaysia on Jan 25, has declined 19.62% from its initial public offering price of RM1.07.