The company said the campaign is part of its corporate social responsibility to promote preservation of the environment, especially among primary school pupils.

“The project started middle of this year and would continue until end of next year,” the company said, in a press statement.

In the campaign, CoolBlog travels to various primary schools to spread messages on conservation issues.

So far, CoolBlog has visited four schools in Johor and one in Negri Sembilan.

Among the schools the company visited in Johor Baru were SK Sri Kenanga, SK Taman Suria and SK IJ Convent. In Negri Sembilan, CoolBlog made a stop at SK Taman Tuanku Jaafar in Seremban.

CoolBlog also provided participants with free “Dino Blog” drinks while the company’s mascot “Miss Cool” made an appearance to the students’ delight. Interested schools can call 1-700 81 9066 for details. 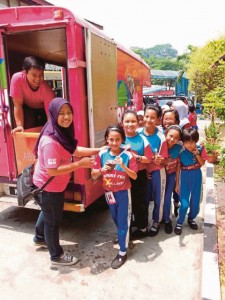