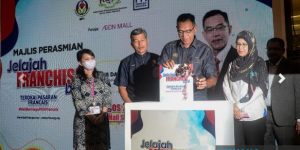 He said the programme, developed by the government, served as a platform for traders to expand their existing businesses and promote businesses affected by the COVID-19 pandemic, to further contribute to the strengthening of the national economy.

“With the help of MFA (Malaysian Franchise Association), this franchise is a business model that everyone can enter into, as there are expensive, medium and low fees.

“Hence, it is our job at the ministry is to discuss with the franchisors to reduce the fee so that those from M40 and B40 can afford to participate,” he said at a press conference after officiating the programme at Aeon Mall here today.

He said the franchise exhibition will take place from today until Sunday involving 20 local franchises with the aim of giving exposure to the existing franchise business system in this country.

According to him, the PJFB in Selangor was the programme’s fourth edition with the third edition being held in Kuantan, Pahang (July 15 to 17); the second edition was in Johor Bahru, Johor (June 9 to 11) and the first edition was in Kuching, Sarawak, from May 27 to 29.

Rosol said that based on the Franchise Bay 2022 report in three states, a total of 24 local franchisors were involved with a total of 59 potential franchisees in Sarawak, 149 in Johor, and 96 in Pahang, expressing their interest to venture into the business.

Meanwhile, MFA vice-chairman Mohamad Shukri Salleh said the programme was one of the efforts of MFA and the ministry to promote franchising to produce potential successful franchise entrepreneurs.

“It is MFA’s hope that today’s programme will successfully generate new franchise potential among the franchisors involved…visitors will also be able to have a better understanding of the franchise business concept,” he said.
He also called on the public to visit the Franchise International Malaysia 2022 (FIM2022) at the Kuala Lumpur Convention Centre (KLCC) from Sept 8 to 10, which is expected to involve a total of 150 franchisors.