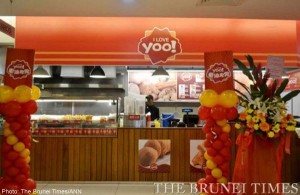 Malaysian-based franchise, I Love Yoo, has entered the Sultanate, according to the founder of the chain.

Jeffrey Leong, owner of the franchise, said: “I see that the Bruneian market now especially on food and beverages has improved steadily compared to the past four or five years… previously, it was hard for one to find foreign (food) brands or franchises here, but now there are plenty,” he said.

He further said that his chain offers snack food or street food that is affordable for all market segments.

“We have light food or snacks that are cheap… previously, you could easily find such food along the streets and with both countries having more or less the same culture, the food is suitable for everyone,” said Leong.

Some of the food offerings that the franchise has include porridge, soya bean milk, fried buns and sesame balls.

“I am keen to introduce more choices here but this will be done slowly as we need to do some surveys and research on what the locals prefer. For the time being, we will stick to the current menu…” he said.

Asked about his confidence in selling such food in the Brunei, he said: “It (the food) has been (traditionally) there for many years already and the difference now is that these foods are sold in better packaging and in different environment so as to offer good quality. Most of our customers in Malaysia are Malays anyway…”

Leong started the I Love Yoo snack food chain in 2007 and it currently has over 40 outlets across Malaysia.

“For Brunei, my partner and I aim to open three outlets here… One maybe in Belait district but everything is still in the pipeline…” he said.