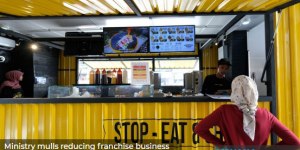 The Ministry of Domestic Trade and Consumer Affairs is considering a proposal to reduce the start-up capital of franchise business to only RM50,000 to facilitate micro-entrepreneurs, especially those who are keen to venture into the franchise sector.

Ministry deputy secretary-general Dr Alauddin Sidal said this was due to the fact that most new entrepreneurs found it difficult to raise large amounts of capital.

He said the ministry also planned to implement affordable franchise packages worth RM100,000 and below, especially in the field of food and beverage (F&B).

This is one of the ministry’s focus in formulating the direction of the franchise industry in the 12th Malaysia Plan (12MP) (2021-2025), which aims to further boost the growth of the country’s franchise industry and doubling the value of franchise sales by 2025.

“This roadmap is business-friendly and facilitates franchise stakeholders in terms of bureaucracy, as well as to restore the franchise industry which was affected by the COVID-19 pandemic this year,” he said.

Alauddin was speaking at a press conference in conjunction with the launch of the Virtual Franchise International Malaysia 2020 (Virtual FIM2020) and 25th Annual General Meeting of the Malaysian Franchise Association (MFA) here today.

He expressed confidence that the franchise sector will be able to achieve the ministry’s sales value target of RM24 billion by 2025 as the franchise business model is seen as a more resilient business compared to other business models to withstand the economic crisis due to COVID-19.

“Until now, we have not received any application from franchisees and franchisors to stop or close their respective businesses. In fact, both parties work together where the franchisor helps in terms of giving exemption from royalty payments, franchise fees, as well as reduces the franchisee’s operating costs,” he said.

To date, the total number of franchise businesses registered with the Registrar of Franchise is 646 companies, comprising 583 homegrown brands and 63 foreign brands.

The Virtual FIM2020, which will be hosted virtually from Oct 15-21, 2020 from 10am-4pm, is targeting franchise investment expectations of RM450 million with over 30,000 visitors, including international visitors throughout the exhibition.

“The exhibitors can communicate directly with the exhibitors through chat rooms, web broadcasts and webinars provided,” he said.

Among the franchise brands that have confirmed their participation in Virtual FIM2020 are The Manhattan Fish Market, Marrybrown, Tealive, Oldtown White Coffee, and LaundryBar.

In 2019, the FIM managed to record RM452 million in potential franchise transactions from 74 franchise brands, an increase of nine per cent compared to RM410 million in 2018.

“We have indeed started the going digital effort since 2018, but when COVID-19 hit us, we see the acceptance to implement digitalization happens faster, even the compatibility between members is also stronger,” Radzali said. 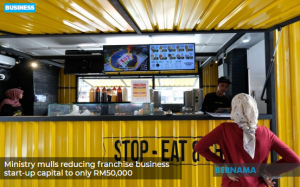