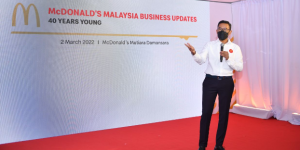 McDonald’s Malaysia is investing RM1.35 billion to open 205 new restaurants as part of its Vision 2026.

The five-year business plan will be supported by 50,000 new workers and career opportunities to be offered to Malaysians as it’s committed to hiring 100 per cent locals.

Managing director and local operating partner Datuk Azmir Jaafar said the expansion will bring the total number of McDonald’s restaurants to 500 in Malaysia by 2026.

Each new outlet, which mostly will be set up in second and third tiers cities, will see investments of about RM5 million to RM7 million per branch.

He said the investment will also be utilised to remodel 155 existing outlets.

At present, McDonald’s Malaysia has 318 restaurants and more than 15,000 workers nationwide.

He said despite COVID-19 challenges, the firm managed to open 35 new outlets in the last two years, growing its sales value by 15 per cent to RM3.25 billion in 2021 from a contraction of four per cent in 2020.

This year, he said, sales is expected to be in double digit growth.

Azmir said McDonald’s Malaysia’s business focus would remain on fan favourite burgers, which contributes 80 per cent of its sales.

Its McCafe makes up 23.5 per cent of market share, serving more than three million cups of coffee per month.

Azmir also said the company is keen to invest RM300 million in training and development programmes to produce up to 15,000 Vocational Academy apprentices by 2026.

He said Malaysian youths can kick-start their career via McDonald’s Vocational Apprenticeship Programme under the government’s National Dual Training System.

On minimum wage to be raised by end of this year, he said 80 per cent of its full-time employees are already earning a minimum of RM1,500 in basic salary.

“So, we only need to tweak the wages of 20 per cent of our full-time employees. By the end of the year, we will be meeting or exceeding the minimum wage,” he noted. – Bernama