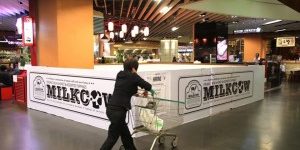 KUALA LUMPUR, Nov 12 — Tomorrow, Korean Milkcow famed for its organic soft serve ice-cream topped with honeycomb, will open in The Gardens Mall. A total of 12 types of ice-cream, some with toppings like honey syrup, cotton candy and macarons, will be available. This is Milkcow’s first store in Malaysia.

The soft serve ice-cream trend first started in South Korea around 2013 where silky soft ice-cream with a milky taste was paired with a honey chip or a piece of honeycomb. The craze for the dessert has seen similar spin-offs like Honey Creme opening up in Taiwan this March with long queues. According to the Singapore’s Straits Times, when Honey Creme opened in Singapore last month, there were long queues of up to two hours for the soft serve ice-cream!

In Malaysia, the Milkcow master franchise is held by Blubites, a company that is part of Blugroupe, which has interests in technology, retail, distribution and real estate. 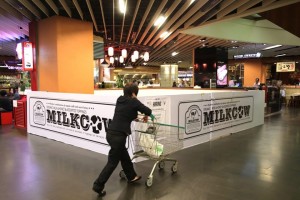 Some of its projects include DSYR, a design and lifestyle marketplace. In addition, they are also the appointed distributor of Callaway golf products in Malaysia.

The Milkcow franchise is the company’s first F&B venture. This was confirmed by Blubites’ Fred Wu in a telephone conversation with Malay Mail Online. Wu said that they see a growing interest for desserts, locally and overseas. 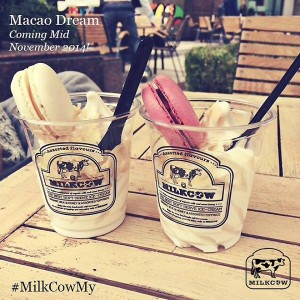 According to Milkcow Korea’s website, the company uses 100 per cent natural honey sourced from honey farms in Sydney and Tasmania. The ice-cream is made from organic milk sourced from Italy for a deeper and richer taste.

In Malaysia, Wu confirmed that all the ingredients for Milkcow will be imported from South Korea.

Within the next year, expect more Milkcow outlets to open in Kuala Lumpur and Petaling Jaya. According to Wu, an additional nine outlets are in the pipeline where the first three outlets will be owned outright by Blubites.

For the remaining outlets, Blubites are looking for partners to take up the franchise. There are currently three sizes of Milkcow outlets. The smallest is Milkcow Express with a space of 200 to 500 square feet, which is the concept that will open at The Gardens Mall. 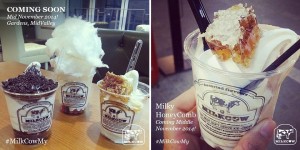 There will be a variety of toppings, like honeycomb, cotton candy and chocolate (left). Milky Honeycomb has a honey chip or a piece of honeycomb (right). — Picture courtesy of Milkcow Malaysia

The next level is Milkcow Counter with an area of 600 to 1,000 square feet. The largest size is Milkcow Cafe with 1,200 to 1,500 square feet. Wu also advised that the franchise fee for a Milkcow Express is estimated to be around RM260,000.

In Korea, Milkcow also sells baked goods, coffee and other types of desserts. Early next year, Wu hopes to launch a new product range of ice-cream cakes. The prices for the soft serve ice-cream, a choice of a 8oz cup or cone, ranges from RM8 to RM12, depending on the toppings.

Brand ambassadors for Milkcow Korea include actor Lee Jong-Suk and actress Go Jun-Hee. The baby-faced Lee recently acted in K-drama Doctor Stranger, while Go has made a name for herself in the television show, Queen of Ambition.

Wu is currently working on bringing them to Malaysia for a Milkcow event. However, nothing has been firmed up.