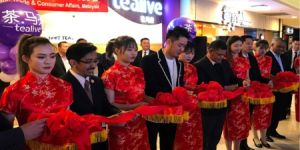 SHANGHAI, 24 February 2019 – Malaysia’s home grown bubble tea brand, Tealive, is stepping up its presence in China this year with the proposed establishment of 10 corporate stores in the world’s largest tea consumer market.

Loob Holding Sdn Bhd chief executive officer Bryan Loo said the move was to allow Tealive to gain a strong footprint in China through franchising as it aimed to open 500 stores within three years.

“In this country, investments are high, we would like to keep it as an asset-light mode, something like McDonalds and KFC, where we franchise out most of our stores in China.

“So, before we franchise outlets, we will first set up corporate stores to test and prove the model works, then only we will explore (the potential of) local entrepreneurs (franchisees) in China,” he told Malaysian journalists after the official launch of its first store in Shanghai by Minister of Domestic Trade and Consumer Affairs Datuk Seri Saifuddin Nasution Ismail.

The store, which opened in November 2018, received tremendous response with overwhelming demand for durian flavoured tea base products followed by other Malaysian flavours like cempedak, gula melaka, Bentong ginger and Sabah-origin tea. 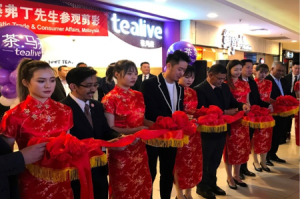