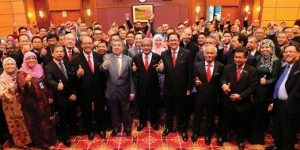 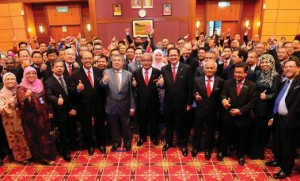 PUTRAJAYA: IT has been an excellent year for the Domestic Trade, Cooperatives and Consumerism Ministry (KPDNKK) as it implemented three agendas simultaneously.

“I’m satisfied with the success achieved in 2014 and it became a commitment to the ministry to give its best to consumers.

“The work accomplished this year is expected to continue in 2015. Undoubtedly, the responsibility and role of KPDNKK will be more challenging,” he said at the ministry’s monthly assembly here yesterday.

Elaborating on enforcement, Hasan said the division was the heart of the ministry. Albeit operating with fewer enforcement officers compared with other agencies, each plan of KPDNKK was executed properly.

“This situation proves the quality of KPDNKK officials surpasses their quantity. In 2014, the enforcement division did its job effectively to strengthen the law.

“This action is aimed at promoting domestic trade and protecting
consumer interests, particularly in
dealing with the increasing cost of living.”

The enforcement division carried out 2,278,345 inspections on business premises.

Out of the inspections, 9,817 involved seized items amounting to RM208 million.

“It is one of the best achievements by the enforcement division.  I want this effort to continue and intensify next year when the Goods and Services Tax (GST) is implemented,” he said.

On Op Harga 2014, Hasan said it was a continuation of the previous year’s Op Harga to curb unreasonable price increases by merchants.

“The action plan launched to combat scratch-and-win schemes outlines the steps that need to be implemented to prevent them.”

On another issue, Hasan said he was aware that over a decade, the issue of smuggling, leakages, stock-outs, the increasing amount of subsidy for petroleum had never failed to make to the front page of newspapers.

Thus, on May 15, Op Titik was launched to prevent the abuse the of subsidised petroleum products.

As a result, problems of stock-out and diesel subsidy amount has been reduced in the same month.

A total of RM390.94 million in diesel subsidy was saved between May and October.

“Op Bongkar, which began on Dec 1, focused on merchants who held bargain sales either in department stores, shopping centres or public hotspots.

“I hope the enforcement division will intensify efforts to monitor traders who have applied to set up bargain sales so that action can be taken against them.

“This is to ensure that consumers are not fooled by the so-called discount in price, but in actuality, the exhibited price was raised prior (to discount),” said Hasan.

He said it was a programme introduced by the government to develop franchise entrepreneurship to take franchise opportunities to all communities.

“Community Franchise Programme is a grassroots programme by the government to familiarise the public with business and entrepreneurship.

“This is because the government was aware of the lack of participation from franchisers and franchisees in entrepreneur initiatives this year.”

Hasan said such a situation occurred due to lack of capital, awareness of franchise opportunities and understanding of the franchise concept.

He said the government’s aim in setting up the Community Franchise programme was to provide franchise opportunities to people, especially those in the low- and middle-income groups.

“As of today, 757 franchise systems have registered with the KPDNKK Franchise Registry.

“Of the total, 7,525 franchisees have established their businesses.

“The government provides help and support to entrepreneurs to develop their business locally and globally,” he said.

Hasan said as a mark of the government’s push for the franchise industry in Malaysia, a RM20 million allocated was provided under the 2015 Budget announced by Prime Minister Datuk Seri Najib Razak in October.

The franchise industry has contributed RM24.6 billion or 2.5 per cent to the gross domestic product last year.

“This contribution is a large amount and for next year, it is expected to increase to RM25.4 billion.”

Hasan said based on the statistics of Companies Commission of Malaysia (SSM) and local authorities in Sabah and Sarawak, there were over one million registered hawkers and petty traders across the country this year.

He said the sector played an important role in socio-economic growth of the country.

The government has introduced several policies, such as three under the Outline Perspective Plan and ten points under the Five Year Development Plan, which has several goals.

“All of this provides a strong framework for preparing Malaysia to be a high-income country by 2020.

“The aim is to ensure that every person has the opportunity, place and role in the journey to transform the country.

“Therefore, the government also wants to see hawkers and petty traders involved and gain benefits from the country’s development.”

He said the government had introduced initiatives under the Hawkers and Petty Traders Strategic Development supported by four thrusts.

“Under these thrusts, there are also quick-win initiatives to be implemented by the ministry in collaboration with agencies.

“To fortify the ecosystem of (the) hawkers and small traders’ sector, KPDNKK will work to reinforce organisations that regulate the affairs of hawkers and petty traders, to ensure initiatives for this sector’s development can be more effectively implemented.”

Such efforts, when combined with various policies, will develop human capital in this sector.

“The efforts made ​​to achieve this agenda is through a partnership with the Perbadanan Nasional Berhad Academy, one of the agencies under KPDNKK, which will lead to a programme to strengthen knowledge and skills among hawkers and petty traders.

“To ensure the financial sustainability of the hawker and small traders’ sector, a better financing model for hawkers and petty traders will be established to guarantee better financial aid for them.

“A provident fund will also be created for these traders.”