Grilling up a storm 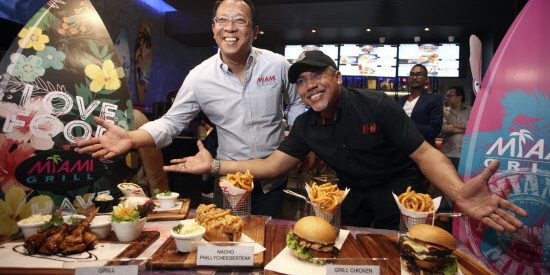 FOR those who crave for something new and different from regular fast-food joints, you may want to hit up Miami Grill’s first restaurant in Asia, located in Sunway Pyramid.

What makes the Florida, US-based franchise stand out even more is that its equity partner is none other than American ­rapper and record producer Pitbull.

The franchise’s sole ­Malaysian outlet is operated by Hani Maju Sdn Bhd, a company with 20 years of experience.

According to Izatsham Othman, the owner of Miami Grill in Malaysia, more than half of the dishes on its menu are exactly the same as those found in the US outlets.

Izatsham added that the restaurant prides itself for being MSG-free and also 100% halal. Not only that, the local ­ingredients used and the final taste of the dishes have been ­approved by its partners in the States, which means they are as authentic as you can get.

There’s really something for everyone on the menu with its wide selection of burgers, soups, salads, pitas, chicken wings and, of course, the franchise’s signature eight-inch Philly cheesesteaks.

As for beverages, there’s the standard range of fizzy drinks but once again, Miami Grill has more to offer in the form of milkshakes by Baskin Robbins, hot and ice-blended coffee by Illy, and mocktails.

The food that we sampled tasted much better than the standard fast-food joint offerings. Take for example the grilled chicken burger. The bun was nice and fluffy, while the meat was still juicy and tender, and the chipotle sauce that was served with it has a mild ­spiciness and tanginess.

On top of that, there’s also fresh and crunchy lettuce leaf, onions and tomato thrown into the mix.

The same could also be said about the chicken pita as it was quite light and a good choice for those who wanted something a little healthier and not too heavy.

As for the chicken nuggets, this would definitely be a hit among the children, as these bite-sized ­morsels were tasty and crunchy.

And, being the company’s signature dish, the 8in Philly cheesesteaks were quite the tummy fillers, and could easily be shared between two individuals.

As far as we know, Miami Grill is probably the first fast-food ­outlet to offer a Philly cheesesteak and do it well.

The combination of the melted ­cheddar cheese, tender ­marinated beef and grilled onions was ­something to remember.

The classic variety cheesesteak has extra sauteed mushrooms and green peppers, which also complemented the beef and cheese quite nicely.

Last but not least, the nacho cheese Philly cheesesteak was quite a sight to behold, as it was topped with onion rings, ­jalapenos and nacho cheese sauce, which surprisingly weren’t too ­overpowering as we could still taste the very nicely marinated beef.

There are also two more ­varieties – original, as well as fajitas which come with chipotle barbecue sauce.