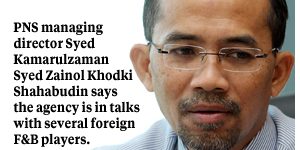 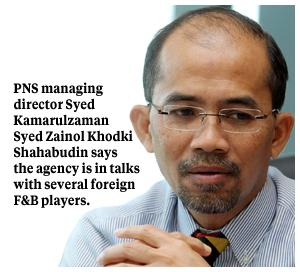 A NUMBER of foreign brands    in the retail and franchising segment are vying to enter the Malaysian market as they view   the country as economically viable for further growth, said Perbadanan Nasional Bhd (PNS) managing director Datuk Syed Kamarulzaman Zainol Khodki Shahabudin.

“Malaysia remains an attractive destination for foreign brands, especially in the food and beverage (F&B) industry, as we have good spending power and the country is economically stable,” he told Business Times recently.

PNS, an agency under the Domestic Trade, Cooperatives and Consumerism Ministry, has been mandated to lead the development of the franchise industry.

PNS has to date brought in Australia’s Gloria Jean’s Coffees Malaysia, which has 31 outlets nationwide.

“We are in talks with a number of foreign F&B players and some others in the service industry.

“The problem is, although we are keen to bring in some of these brands, Malaysians may not be ready for them yet,” said Syed Kamarulzaman.

He said some of the companies looking to set up franchises here included a retirement home franchiser and a Muslim funeral services provider.

Syed Kamarulzaman said Malaysian business owners need to look into getting their business franchised due to customer confidence in franchises.

“A franchise is more systematic and seamless. In order to become a developed nation, we have to have this seamless system in our retail industry.”

“Our focus this year is to not only look outwards for brands to bring in, but also get more Malaysian brands to adopt the franchise system as franchises will be able to withstand possible economic shocks better than standalone ones,” he said.

PNS has an allocation of up to RM15 million to bring in new brands into the country.