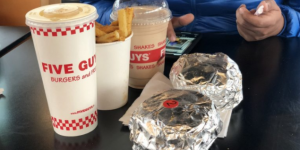 Five Guys, the burger chain from the US is about to open its restaurant in Malaysia. It appears that its first outlet is at Genting Highlands and a hoarding board with “FIVE GUYS COMING SOON!” was spotted by myBurgerLab.

Five Guys primarily serves burgers, hot dogs and sandwiches which you can customise with as many free toppings as you like. This typically includes mayo, lettuce, pickles, tomatoes, grilled onions, grilled mushrooms, ketchup, mustard, relish, onions, jalapeño peppers, green peppers, Bar-B-Que Sauce, hot sauce and A1 sauce.In most markets, customers can enjoy an endless selection of drinks from a Cola-cola freestyle soda dispenser.

They do have the machine in the Singapore outlet, and we are guessing that Malaysia might get it too. Five Guys also serves milkshakes and they let you choose as many mix-ins which include bananas, chocolate, coffee, oreo cookie, salted caramel and more. While waiting for your order, you can even help yourself to some complimentary peanuts.

Five Guys was founded at Arlington, Virginia in the United States in 1986. The original “five guys” was Jerry Murrell and his four sons. Two years later, he had a fifth son and eventually, all of his five sons are involved in the business. Five Guys has over 1,600 restaurants worldwide with most of its outlets located in the United States and the United Kingdom.

At the time of writing, the Five Guys Malaysian website is already accessible but it’s just an empty template at the moment. 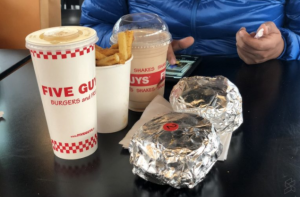