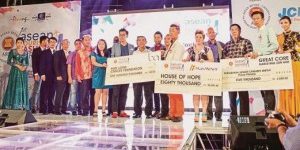 GEORGE TOWN: DESPITE a steady drizzle throughout the evening, more than 1,200 people turned up for the inaugural Asean Tourism and Fashion Fair 2014 which was held at the Maritime Automall on Karpal Singh Drive recently.

Organised by the Asean Retail-Chains and Franchise Federation (ARFF), the fair was a big hit with local and foreign visitors who thronged the exhibition area which has a panoramic view of the scenic coast and Penang Bridge.

Visitors were greeted by models in traditional attire of Asean nations and many took the opportunity to have their photographs taken with the models.

The event was held in conjunction with Visit Malaysia Year 2014 and a prelude to Visit Penang Year 2015.

In his welcoming speech, ARFF national chairman Datuk Richard Koh said the fair would elevate Penang’s and Malaysia’s status as an international tourist destination and to make the region a world-class tourism and shopping paradise.

He said the fair would be the start of many international events to promote the island.

“The quality of the fashion show will be a testimony of the talent of our local designers and will make a huge impact on the haute couture industry of the world.”

Several organisations gave donations to a number of charitable bodies at the event.

While the visitors helped themselves to food and free-flowing beverages, the fashion show began in earnest with models sashaying on the catwalk wearing the dazzling designs by local designers.

There were booths to promote local tourist attractions such as the Botanical Gardens, Fort Cornwalis, the Penang Butterfly Farm, and the Bird Park.

Car enthusiasts were treated to a display of luxury cars, and had a closer look at the latest models.

ARFF will be one of the organisations taking part in the 2014 Penang Year-End Countdown Jubilee 2 to be held on Karpal Singh Drive.

The organisers of the event are Ewein Zenith Sdn Bhd and Zeon Properties Sdn Bhd. 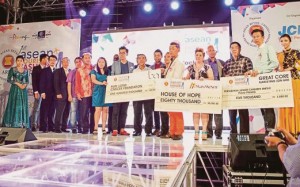 Representatives of beneficiaries, donors and VIPs at the event. Pix by Paul Toh