THE story of how Tealive came about is probably known to many. The brouhaha with its predecessor wasn’t exactly a quiet one. But Bryan Loo, chief executive officer of Loob Holding Sdn Bhd – the owner of the Tealive brand – has made good of his second take on bubble tea. Tealive passed its 200th store milestone in Malaysia earlier this month and is looking at rapid expansion in the region next year.

“We were lucky that the transition (from being the Chatime franchisee to Tealive owner) was smoother than we could have expected. And we grew by 50 outlets this year in Malaysia alone. So it shows there’s consumer acceptance (of the Tealive brand),” he says.

For those not in the know, Loob was previously the master franchisee of the Chatime brand in Malaysia until its Taiwanese brand owner La Kaffa International Co Ltd terminated the agreement in January 2017. Following the termination, Loob launched Tealive the following month and some 165 Chatime stores were then converted into Tealive stores.

Operationally, not much has changed, says Loo, as it is still running a similar business. But operating his own brand has been a liber- ating experience.

“The sky is the limit,” he says. “Being a brand owner required us to have a change of mindset. Previously, we were just taking instructions, but now, we are taking care of our own brand and we need to think of how we can take the brand international. We feel super empowered. It is more purposeful because Tealive is a Malaysian homegrown brand,” adds the thirty-three-year-old.

The company is also looking at ways to continue innovating its customer experience and product offering to expand its reach. The idea, he says, is to modernise the tea drinking experience for its customers. It is currently reportedly serving 2.5 million customers a month. Its menu has expanded to include coffee and snacks to cater to its larger store format, particularly in smaller towns where patrons are looking for a sit-down venue. 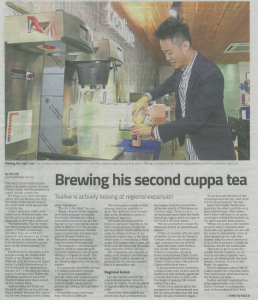