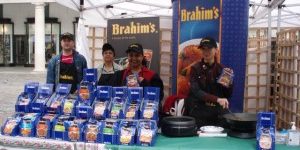 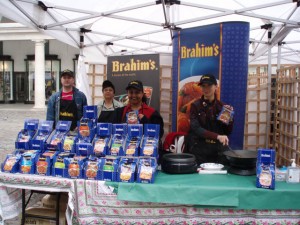 Brahim’s Holdings Bhd displaying its goods in London. The company and Quantum Angel Sdn Bhd are involved in a RM95 million deal to buy the Burger King franchise in Malaysia and Singapore

Both are acquiring the 100% equity interest in Rancak Selera Sdn Bhd which is owned by Ekuinas, the government-linked private equity fund management company.

Rancak Selera is the holding company for both Cosmo Restaurants Sdn Bhd and Burger King Singapore Pte Ltd, which hold the franchise rights in Malaysia and Singapore.

In a statement today, Brahim’s said it will seek a strategic co-investor to take up 30-40% new equity stake after the acquisition is completed.

“We are pleased to be investing in the Burger King franchise in Malaysia and Singapore. It possesses a strong brand and the trend of increasing fast food consumption by Malaysian and Singaporean consumers provides us with significant growth potential,” Brahim’s
executive chairman Datuk Seri Ibrahim Ahmad said in a statement.

“Moreover, our association with Burger King for the past 15 years through our KLIA Burger King outlets, coupled with the expertise of Quantum Angel which is led by Datuk Ahmad Zaki Zahid who has extensive experience in the QSR sector, we are confident the business will grow.”

Ahmad Zaki was also formerly an aide of Malaysia’s fifth prime minister Tun Abdullah Ahmad Badawi, whose is the brother of Brahim’s Ibrahim.

Prior to the deal, Ekuinas had a 74.1% stake in Cosmo Restaurants wholly owned the franchise for Singapore under Burger King Singapore.

In September 2011, Ekuinas spent RM68.2 million on the Burger King franchise, when it injected capital into Cosmo Restaurants and took over the minority shareholders’ stake in Cosmo Restaurants.