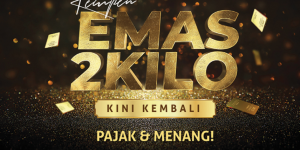 BANK Kerjasama Rakyat Malaysia Bhd (Bank Rakyat) targets 20% growth in Ar-Rahnu loan disbursement and an expansion of between 2% and 5% in number of accounts underpinned by its “Kempen Emas 2 Kilo” to encourage more customers to utilise the bank’s Ar-Rahnu Pawnbroking-i and Ar-Rahnu X’Change services.

The “Pawn and Win” campaign, which starts from yesterday until Nov 15, 2020, allows the community to use the Ar-Rahnu facilities that are offered throughout 185 Bank Rakyat and Ar-Rahnu X’Change branches nationwide.

Under the campaign, the bank said it offers 28 prizes worth more than RM400,000 or 2kg of gold to customers of Ar-Rahnu Pawnbroking and Ar-Rahnu X’Change.

The campaign returns for its third year due to an encouraging response from its customers, as well as an appreciation to the bank’s loyal customers.

At the end of last year’s campaign, the bank achieved a profit of RM2.4 million that saw a participation of 240,000 customers.

According to Bank Rakyat, the campaign intends to educate the community that gold is an investable asset that can be used to boost individual economics standards and is capable of generating the country’s economy.

“Malaysian community is beginning to see the advantages of Ar-Rahnu services which not only can help to reduce their short-term cashflow problems, they can also be a financing alternative that is easy to process especially for micro and small and medium enterprises industry.

“This scenario can be seen during the Movement Control Order that was implemented by the government, in which most communities have utilised Ar-Rahnu services to help them in supporting their financial needs,” it said in a statement yesterday.

It also hopes to change the perception of the public that Islamic pawnshops are not only for those faced with financial problems, but also a safe place to store gold accessories while avoiding “riba” (usury) which is prohibited by Islam.

The grand prize winner of “Kempen Emas 2 Kilo”, which will be announced when the campaign ends, will bring home a 1kg gold bar, while other prizes offered include 500g, 250g and 10g of gold wafers. 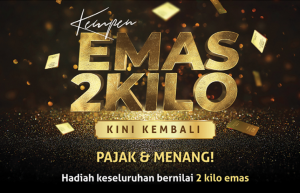