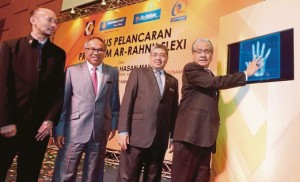 BANK Rakyat is targeting to disburse RM150 million financing to cooperatives that operate the Ar-Rahnu X’Change business, through its latest scheme Ar-Rahnu Flexi, next year.

The bank has, since Ar-Rahnu’s establishment in 2008, disbursed more than RM370 million to finance 28 cooperatives that manage such business outlets.

“And we expect single-digit growth for next year as it is still at an infant stage of business,” he said after the launch of Ar-Rahnu Flexi by Domestic Trade, Cooperatives and Consumerism Minister Datuk Seri Hassan Malek, here, yesterday.

There are currently 90 cooperatives managing Ar-Rahnu outlets, while 42 outlets are managed by Bank Rakyat.

Ar-Rahnu Flexi is open to all cooperatives registered with the Malaysia Co-operative Societies Commission and Ar-Rahnu franchisees under Rakyat Management Services.

The scheme offers a five-year maximum financing period with maximum disbursement of up to 80 per cent of the “marhum” (pawned gold) value. It is a revolving financing of up to five years.

Earlier, Hassan said traders should be prepared to provide collateral either in the form of shares or properties to obtain financing.

The minister is optimistic that the competitive financing packages under Ar-Rahnu Flexi will attract more cooperatives to become franchisees for Ar-Rahnu business.

“Cooperatives must make thorough preparations in terms of mental, physical and financial resources to make their businesses bigger and better,” he added.