Drive around most neighborhoods and you’ll likely bump into a 99 Speedmart around the corner. The convenience store brand is best known for its affordable prices with a wide range of options to fulfill your grocery needs.

Whether it’s the best mini-mart around is subjective, but for many, it’s a reliable staple store that neighbourhoods can depend on, so it’s no surprise that it found enough popularity to open 1,500+ stores around Malaysia. In 2020, it was reported that the brand has opened 3 outlets across the causeway too.

The man behind its successes is Lee Thiam Wah, who founded the convenience store 32 years ago.

No Legs, No Problem

Lee was born with poliomyelitis—a disease to his central nervous system—and at 8 months old, he was already bound to a wheelchair for life.

With 10 siblings in a low-income household, his construction worker father and hawker mother worked round the clock to feed them, leaving them with no time to care for Lee.

Due to his disability, he had to leave school after his primary education, as secondary schools were located too far from home for him to travel. “Struck with this condition, I envied my siblings as I watched them lead normal lives. They went to school, played sports, and hung out with friends while I could not do much else other than sit up,” he revealed to The Star in 2017.

Lee grew close to his grandmother who would nurture him and encourage the then-teenager to find his own way. She told Lee that he was only disabled physically, not mentally; he was smart, and she said he could still use his hands to do much more.

Her words struck Lee, who realised that no one in his family had pursued anything in the business world before. This inspired him to earn some money by selling snacks on his front porch.

Saving up what he earned from those sales, he opened his first sundry shop called Pasar Raya Hiap Hoe in 1987 at 23 years old, with a capital of RM17,000. This was the start of his retail training where he learnt about what customers would buy and connect with suppliers to learn about their prices.

All this would later come in handy when running his mini-mart empire.

5 years later, Lee sold his sundry shop ($88,000, according to Forbes, RM38,000 according to Enterprise Asia, RM30,000 according to The Edge) and opened up a mini-mart called Pasar Mini 99 in Klang Utama. He wanted the challenge of running a bigger business, and so chose to build a chain of mini-marts.

The name is a symbolic one for Lee too, “We chose the number 99 because it implies that even though we are not perfect, we still aim to offer our customers the best services and products we have at a competitive price,” he told The Star.

In true Asian fashion as well, the near-perfect score of 99 also reminds Lee that there’s always room for improvement.

99 Speedmart keeps its prices low by selling products in smaller sizes. With experience running his sundry shop, Lee knew exactly which fast-moving goods had high turnover rates and would stock up on those.

During the brand’s early days though, profit margins for certain products were sacrificed to sell them at the lowest price possible. However, it helped build the brand’s reputation with Lee tediously overseeing its operations. The businessman also had a good relationship with suppliers and avoided dragging out payments, something which bigger grocers were supposedly infamous for.

With Lee, vendors were able to collect their payments within 30 minutes for a previous order when dropping off a new stock of products at the outlets. Suppliers appreciated Lee’s strong trade reputation.

By 2017, Lee celebrated his 1,000th store in Shah Alam Section 13, Selangor. Though the exact number of 99 Speedmart stores around today is inconclusive, there are at least 1,500 around Malaysia, and 3 that opened in Singapore in 2019.

No Signs Of Slowing Down

Despite not having an e-commerce site, 99 Speedmart was still one of the main choices for physical grocery shopping during 2020’s MCO. The low-budget grocer was thriving, as 39% of Malaysian consumers (who were respondents on a Vase.ai survey) were buying their groceries from 99 Speedmart.

The other 40% and 21% would get their groceries from mom-and-pop stores and Tesco respectively.

According to The Edge in 2014, Lee had no plans to go into the hypermarket or supermarket spaces. To remain competitive, he plans to stick to what he knows by growing his mini-markets. 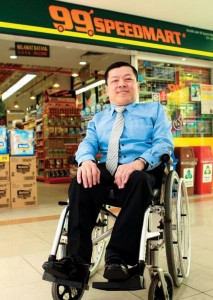